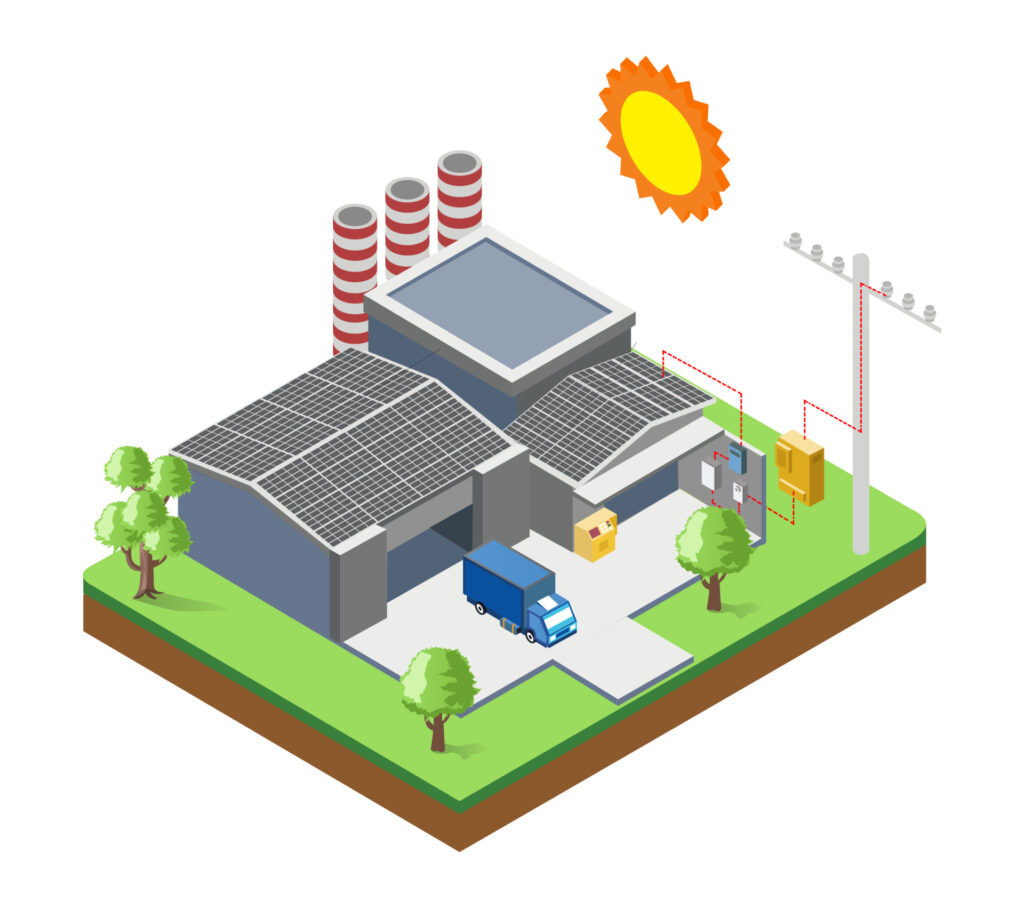 Solar Modules comes with 25 Years power performance warranty.So after installtion of solar, you will get free electricity for minimum 25 Years

You can avail 80% Depreciation under section 32 of Income Tax. This means you can save 25% amount of system cost in IT

We offer Easy Finance option for solar projects like PPA ,Soft Loan. In Soft Loan we offer 100% finance with minimum interest so your monthly EMI will be much lower than your monthly electricity bill.

Get A Free Quote

Get a free quote for your solar project on your company.

Solar power system for an industrial facility in India would typically include a set of solar panels to generate electricity, a inverter to convert the electricity from direct current (DC) to alternating current (AC), and export any excess energy to DISCOM for use during periods of low sunlight.

Installing a solar system on industrial rooftops means you won’t have to pay rates as high as ₹12, ₹14, or ₹16/unit any longer since solar energy is free after the successful installation of solar panels! It can reduce your electricity bills by more than 80%.

Whether your rooftop is an RCC terrace or a metallic sheet roof, we install different types of industrial rooftop solar systems that’ll be apt for your roof. Even if the rooftop space is limited, we offer both commercial rooftop solar systems with net-metering and captive power plants without net-metering to take care of all your energy requirements (even if those requirements are very high).

Solar power systems can provide many benefits for industries, including:

1)Cost savings: One of the main benefits of solar power systems for industries is the potential to reduce energy costs. Solar power is a free and renewable source of energy, and once a solar power system is installed, the cost of electricity is largely locked in, providing a hedge against the volatility of fossil fuel prices.

2)Reliability: Solar power systems can provide a reliable source of electricity. This is especially important for industries that require a constant and stable supply of electricity to operate.

3)Reduced greenhouse gas emissions: Solar power systems do not produce any emissions, which means that they do not contribute to climate change in the same way that fossil fuels do. As a result, industries that adopt solar power can significantly reduce their carbon footprint and improve their sustainability.

4)Independence from increase terif rate: By producing their own electricity, industries can reduce their dependence on the traditional grid.

5)Positive public perception: Industries that adopt solar power are often viewed positively by the public, as it shows that the company is actively working to be more sustainable and environmentally-friendly.

6)Government incentive: As I mentioned earlier, the Indian government has introduced a number of financial incentives to encourage industries to adopt solar power, which can help to offset the initial capital costs of installing a solar power system. One of the most important is the “Accelerated Depreciation” policy, which allows industries to claim accelerated depreciation of up to 80% on solar power projects in the first year of operation.

Capital expenditure (CAPEX) model: Under this model, the industry purchases the solar system and bears the entire cost of installation. The industry can claim accelerated depreciation benefits and generation-based incentives (GBI) for the solar power generated.

Power purchase agreement (PPA) model: Under this model, a developer installs, owns, and maintains the solar system, and sells the power generated to the industry at a pre-determined rate for a specified period (usually 20-25 years). This allows the industry to use solar power without the upfront capital investment.